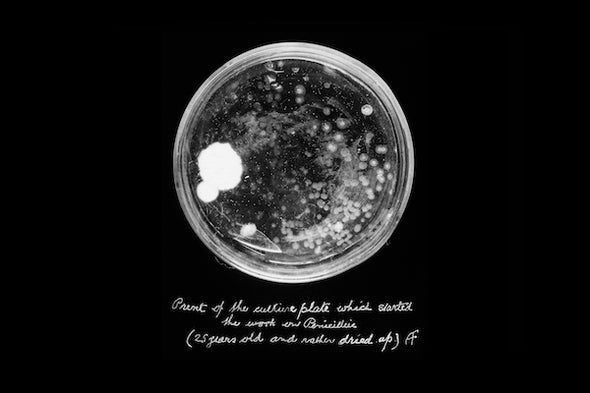 It was the morning of September 3, 1928. After a two-week vacation, Alexander Fleming had just returned to his lab at the St. Mary’s Hospital in London. He started to sort through Petri dishes containing colonies of bacteria. While doing this, Fleming noticed something unusual in one petri dish, which had mistakenly been left open for the entire time.

He saw a growth of blue-green mold—but the area immediately surrounding the mold was clear of bacteria. Based on this observation, Fleming concluded that the mold secreted a substance, which he later called penicillin, that inhibited or killed the microorganisms. This serendipitous discovery changed the history of modern medicine. Penicillin would go on to save the lives of millions of patients infected with deadly bacteria.

As a bacteriologist, however, Fleming knew that evolution is an unavoidable process, and that bacteria would ultimately become resistant to the antibiotic. His prediction was correct—the first penicillin-resistant pathogen was detected in 1940.

Since then, many other antibacterial drugs (both natural and semisynthetic) have been introduced; however, within a few years of their clinical use, pathogens resistant to those drugs emerged as well.

The recent emergence of a carbapenem-resistant pathogen is the most worrying of all, because this drug is the last known line of defense against microbes that are resistant to multiple antibiotics. This is a growing concern worldwide. In the United States alone, according to the Centers for Disease Control and Prevention (CDC), drug-resistant bacterial infections kill more than 23,000 people every year and cost the country annually at least $20 billion in addition to direct healthcare expenses.

Unfortunately, there is a severe shortage of new antibacterial drugs in the development pipeline, and most of the those that are currently in use are modifications of existing classes of drugs. This poses great challenges to physicians treating severe infections, and has led to the fear of the arrival of a post-antibiotic era.

But recent advancement in scientists’ understanding of host-pathogen relationship has given scientists insights into an alternative approach called host-directed therapy (HDT), a suite of treatments whose goal is to enhance the host's own immune response rather than relying exclusively on antibacterial drugs.

Some promising examples of HD include commonly used drugs for non-infectious diseases—verapamil and metformin, for example which modulate inflammation and increase host antimicrobial response to pathogens; cytokines, a group of proteins that include interleukins, that induce host pro-inflammatory cell signaling to kill pathogens; and nutritional products such as Vitamin D3, which augments the host’s cellular defenses.

HDT also aims to balance host reactivity at the site of infection by reducing or preventing an excessive inflammatory response, which can damage internal organs and can even kill. This is achieved through cellular therapy, in which a specific population of bone marrow cells is injected in a host’s body, reducing and preventing tissue.

Fully understanding how these factors contribute to host defense and inflammation control will be extremely useful in personalized medicine, where patients’ genetic traits can guide the treatment for infections. I believe that subtle differences, called polymorphisms, in the DNA of host factor genes could explain why some individuals are more susceptible to pathogens than others. By identifying these polymorphisms in humans and linking each one with the patient’s level of pathogen susceptibility, my research could lead to a more effective treatment in bacterial infections.